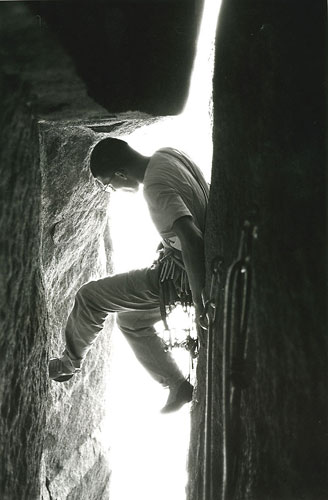 In a valley far, far away
The hope of freedom was kept alive by a small band of Camp 4 rebels.

Led by young Royal Rockwalker, and the shaggy, five-foot wookie

The rebels were prepared for offensives . . .

On the granite walls of Yosemite.

Yes, in that long-ago time I actually did have the opportunity to climb with those not-yet-so-famous occupants of Camp 4, Royal Robbins, Chuck Pratt, Yvon Chouinard and TM Herbert. Each were masters of style and each of them were leaders of that golden age of Yosemite big wall climbing. We loved the movement in climbing, the beauty of the creation, the depth of our companionship, and the discovery of the unknown. It was great!! Those El Cap climbs we did together changed my life. They changed who I was. I am grateful for the experiences. It seemed unlikely to me that such adventures would ever be possible again. But in recent years I have been able to return to El Capitan, and to those same routes of long ago. To my joy, it was just the same - great companionship and classic climbing. The only mystery is why they have become so much harder.

The golden age was all about style. We were not confronted by concerns about regulations, over-use, worn out routes, topos, or public opinion. We were very mindful of the example of our pioneer predecessors, but we felt free to follow our own path and make our own choices.

El Cap in the 1960's was a blank page waiting to be written upon. But life always has two opposing views - and so it was in the beginning of the golden age. One view emerged which supported style and preservation. The motto was, "leave no trace". These proponents believed, "It isn't getting to the top that counts. It's the way you do it". This mentality shaped character. Climbing became an internal game. It was based on personal responsibility.

The opposing view was not about style or responsibility. Its foundation was entitlement. These climbers were not concerned about how they climbed, nor about the environment, nor about future climbers. Getting to the top was the goal. Theirs was an external game.

In America, the clean climbing revolution of the 1970's replaced the use of pitons with nuts, runners, and later spring-loaded cams. This switch to clean climbing saved our cracks.

In the 1980's the arrival of sport climbing opened climbing on previously unprotectable walls with the use of artificial protection. This type of climbing inflamed the already existing conflict among climbers between "leave no trace" and "do what you want".

The rise of gym climbing in the 1990's popularized the sport. Climbing no longer is an obscure sport done by a few, with makeshift equipment, in remote places. In 2002 climbing is big business, highly visible, extremely popular, diversified, unmanaged, highly specialized, and highly scrutinized. We are here today to address these issues.

The styles of rock climbing fall into 5 basic categories. They are as follows:

4. Plaisir Climbing (if I understand it correctly):

We now live in a mobile, ravenous information age. This has afforded many with much, and greatly shrunk the world. It has created a subculture of wanna-be's, seeking instant gratification with little or no accountability. This group has invaded climbing. They act like unmanaged youth: I want it. I take it. I walk away from it. And there are no consequences.

One must always remember that - selfishness, - entitlement, - lack of self management, - mis-education, - and disrespect are the culprits. These 5 attitudes are the enemy, not the people. I am reminded of the fact that nature gives more than it takes - but man takes more than he gives until he becomes aware. Together we can work to increase man's awareness.

To increase awareness we must become conversant with:

The skills we need for this task, both during this conference, and after the "Tyrol Declaration" is completed and goes forth to the world, are:

The groups we need to reach are these:

Crafting a document that outlines freedom governed by boundaries has always been a challenge. Yet, I believe this convention will find its way through the issues and present a set of guidelines that will stand as a firm foundation and ensure the continuation of climbing for generations.

This address was delivered at the International Congress, "Future of Mountain Sports," a

gathering of some one hundred alpinists assembled for the purposes of completing the Tyrol Declaration on Best Practices in Mountain Sports. The conference was held in Innsbruck, Austria September 2002. It was sponsored by the UIAA Mountaineering Commission and the Austrian and German Alpine Clubs.
| Previous Commentary | Next Commentary |
| Frostworks Home | Tom Frost Collection | Contact |